Among trade-union houses of Odessa at the turn of 1920-1930 only few are deserved the true attention. Many creations of such architects as S.S. Galperson , A.I. Dubinin and P.N. Didenko are prompted the undoubted interest. One of the buildings authored P.N. Didenko will be discussed below. 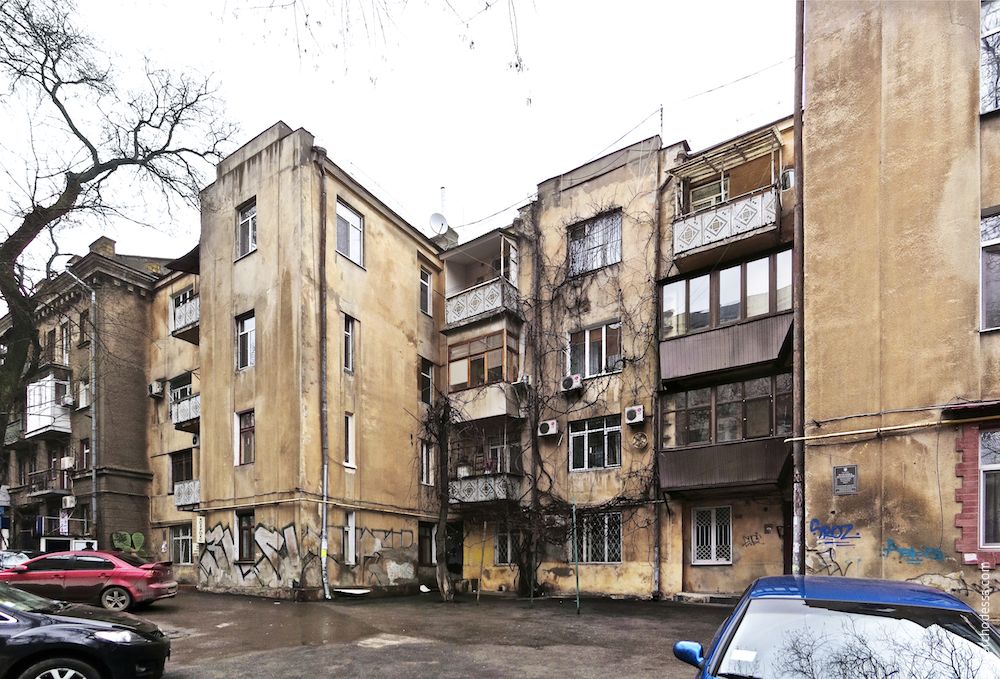 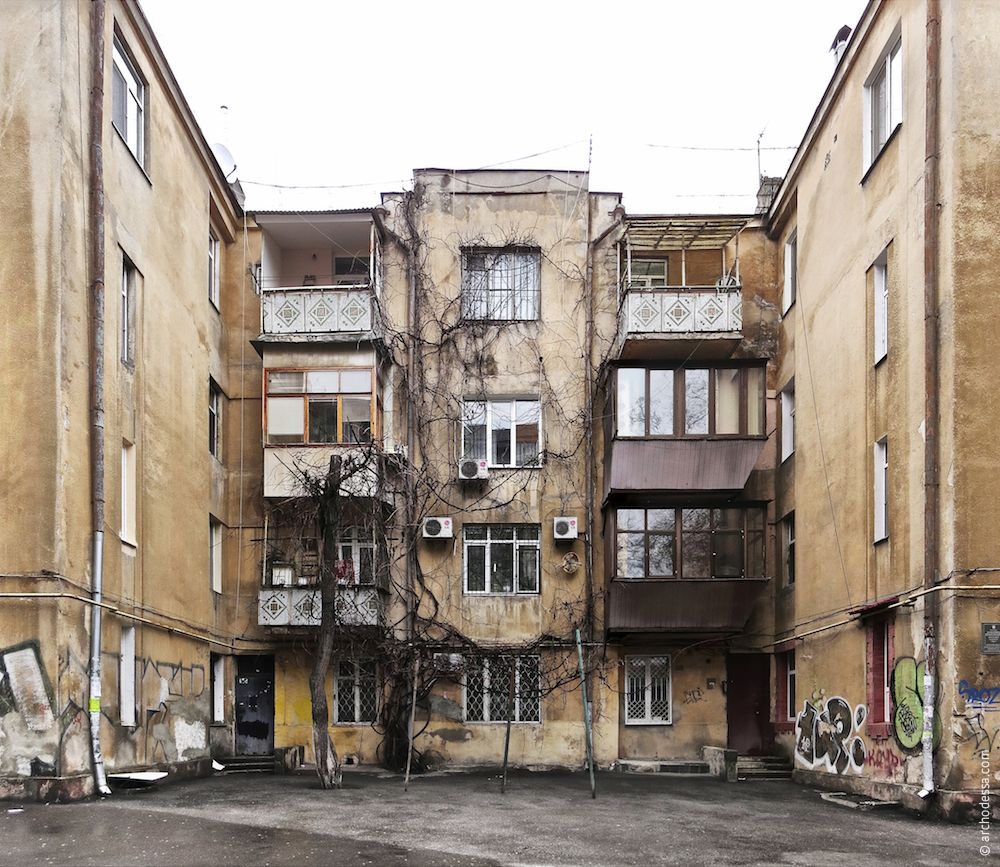 In the second half of the 1920s constructivism with all revolutionary symbols based on new technological developments became the style of the epoch in the largest industrial Soviet cities. It was due to the fact that it was often implemented in ensembles and large community buildings. In most cases Odessa’s constructivists formally imitated known examples, often refusing to seek their own handwriting and means of expression. Impersonality and dryness of most constructivist town houses testifies about it eloquently. Buildings were also built from traditional materials (coquina, wood, etc.), and there were even some signs of regression in construction engineering in comparison with 1910.

The practice of model projects was not welcome in constructivism, because every home style concept had to be linked to its environment and terrain in general. Despite this fact some architects such as N.M. Kanevskiy ignored this rule. The project of a type section by Kanevskiy formed the basis of residential buildings of houses and communal services «Vodnik» and «Pishevik». 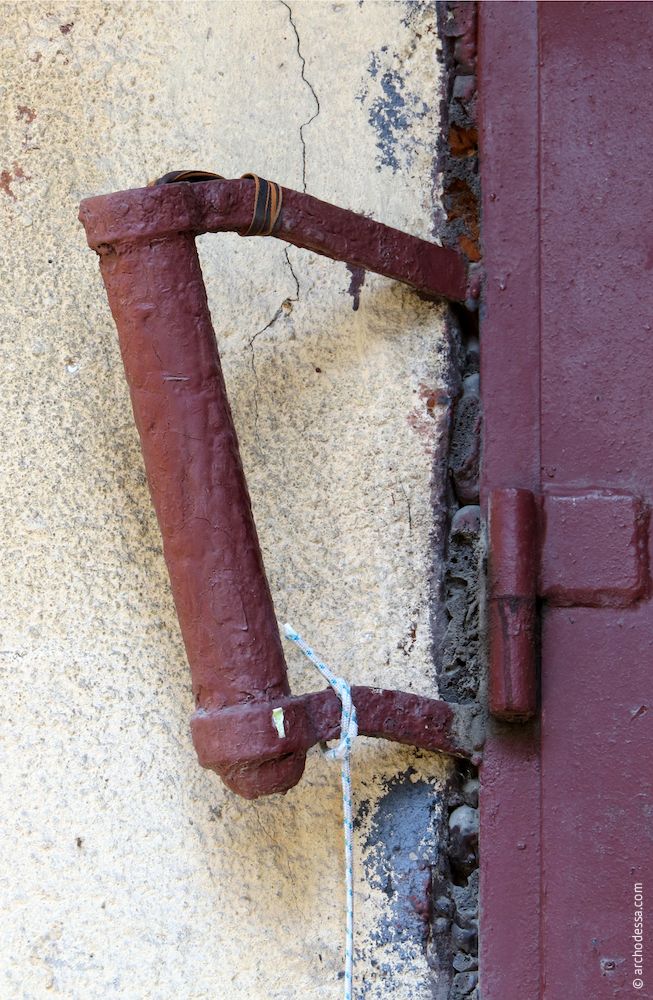 The holder of the flag at the entrance to one of the front porches.

The staff architect of Black Sea Shipping Company P.N. Didenko did not leave rich architectural heritage, but all the houses had been built by him were very individual and quite recognizable despite the modest set of expressive means.

The buildings of Soviet merchant fleet (full name — the Union Association of the Soviet merchant fleet for overseas transportation by the water transport Commissariat of the USSR) have become the architect’s calling cards in Troitskaya Street and in Mayakovsky Lane. In both houses Didenko applied the rules and demands of the epoch successfully, the observance of which was necessary for construction multi-flat houses with high level of comfort. 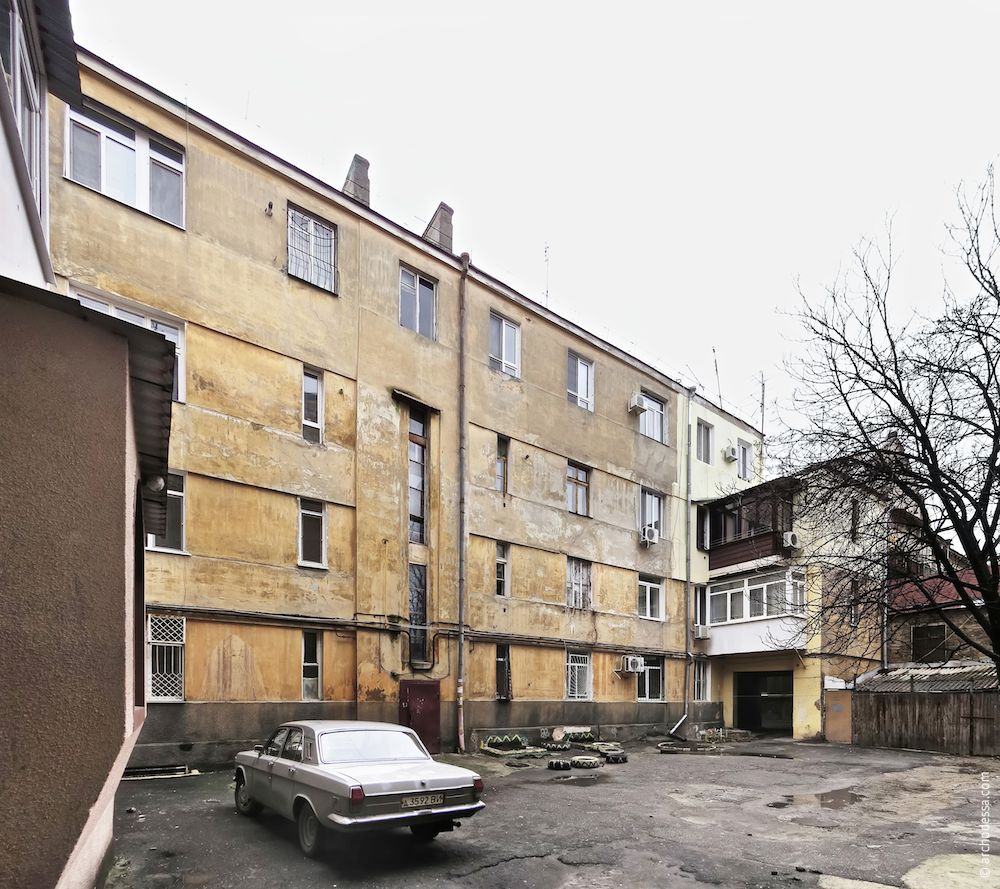 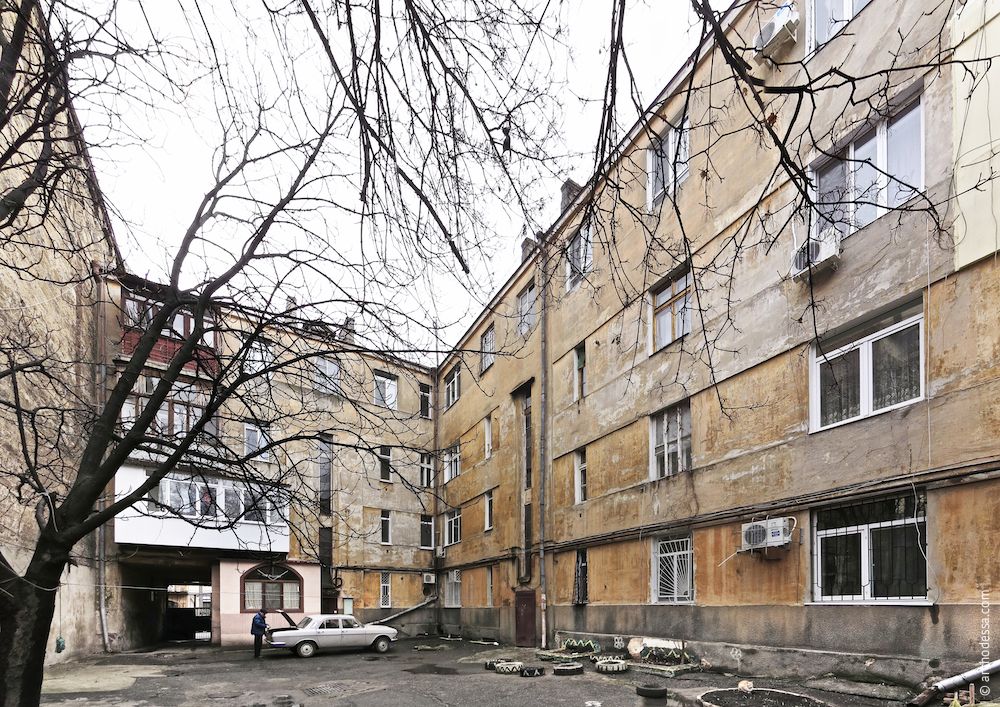 troickaya-22_6. Right hand (first) courtyard, the view on the front wing and arch of the passage 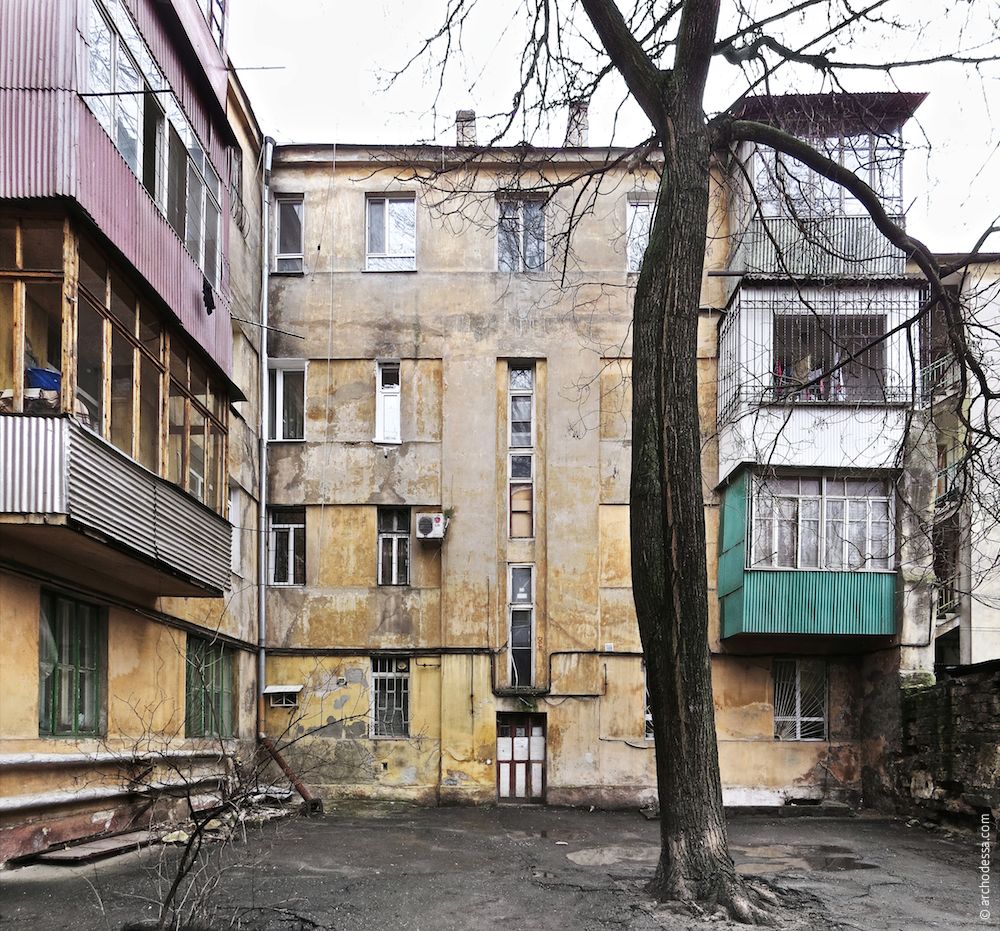 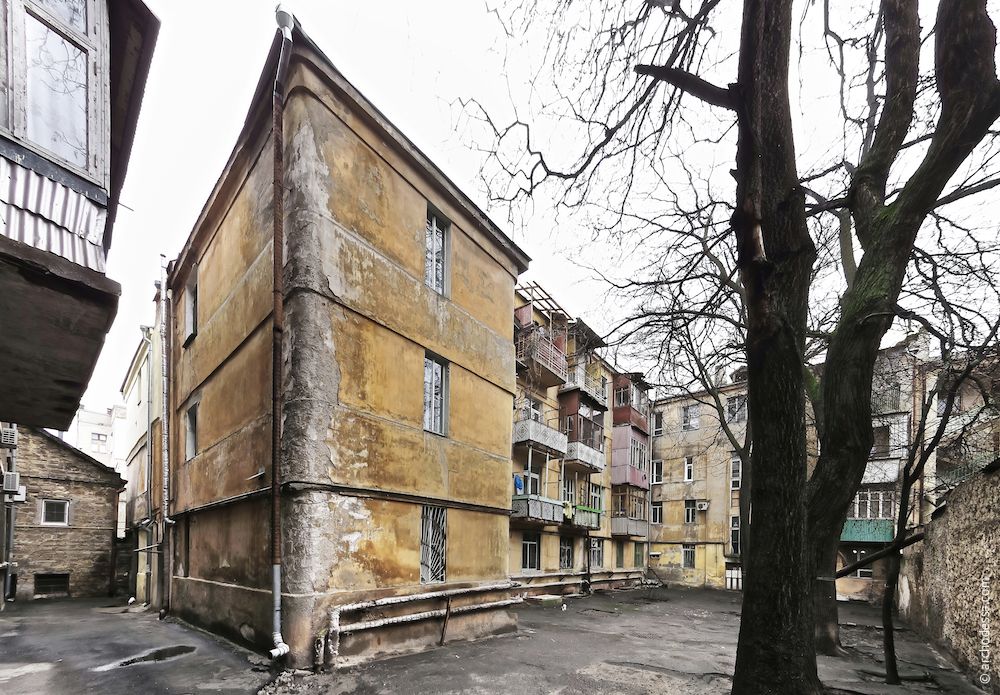 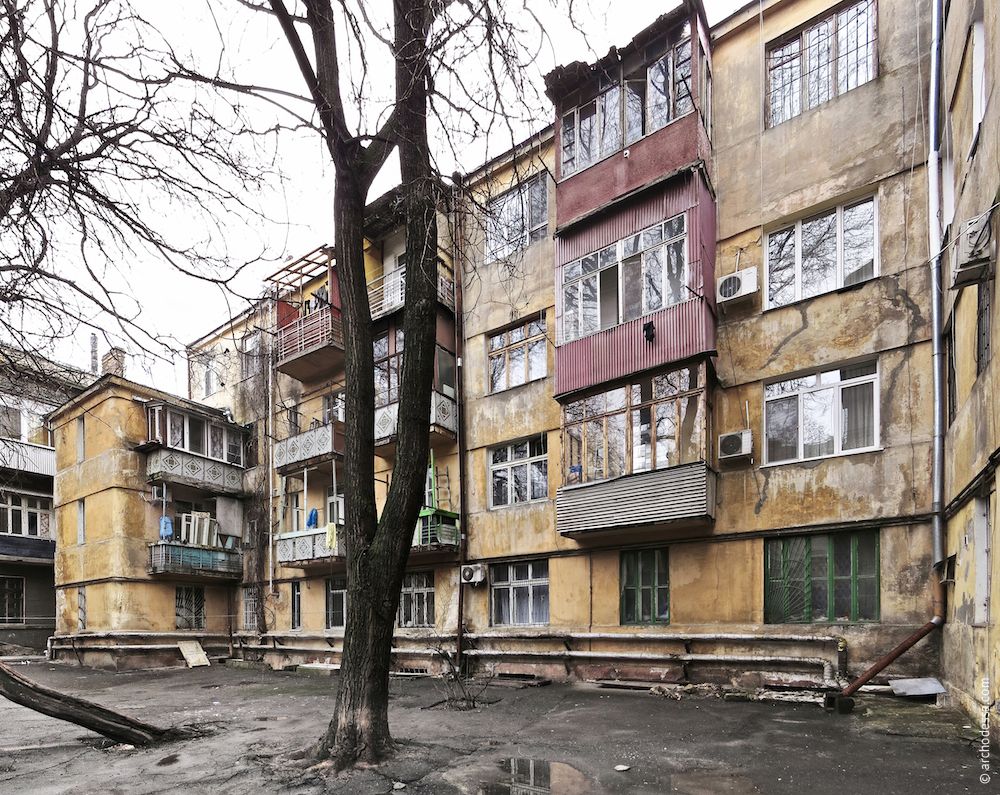 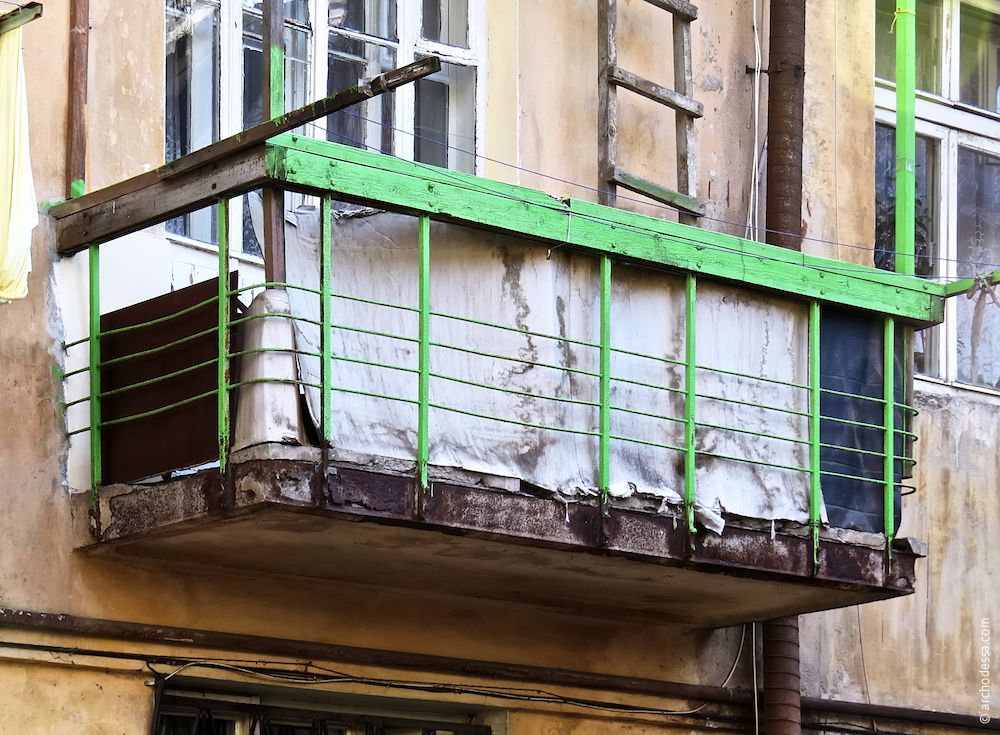 While constructing the house in 22, Troitskaya the architect had a difficult task — as correct as possible to place a simple and neat building next to the magnificent creations of A. Bernadazzi’s architecture and Asvadurov’s apartment house across the street. Didenko went through the shapes and volumes game by adopting composite moves of an architect J. S. Goldenberg.

The central part of the house was moved deep in the area, the inner edges of the side sections were marked by shallow risalits and topped with simple attics. The same attic crowned risalit in the middle of the house, and formed kurdoner with shallow depths turned out quite solemn. The general plan of the building has the shape of an anchor or a plane, and if we do not take into consideration the passage arch, situated in the right wing, the house turned out strictly symmetrical. 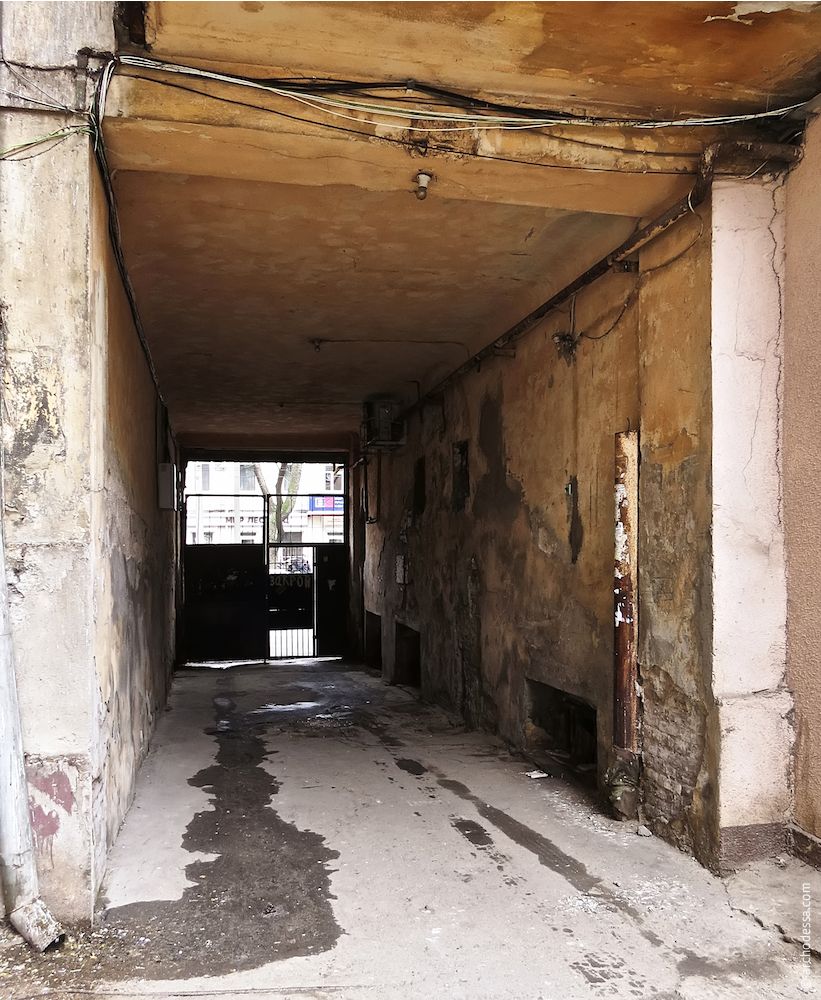 Passage arch into the yard from the street 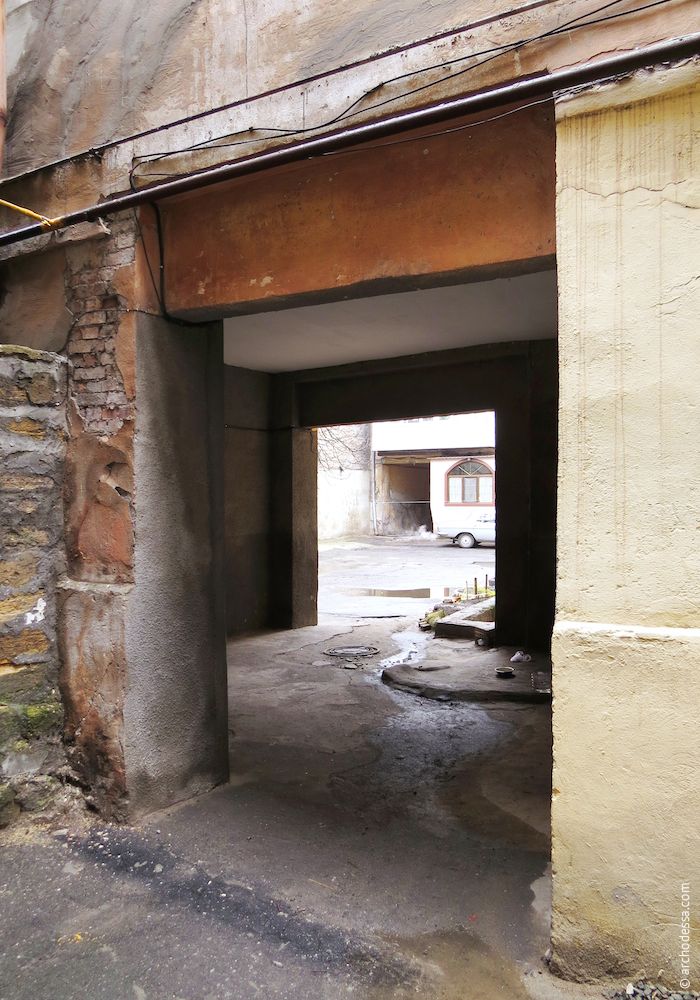 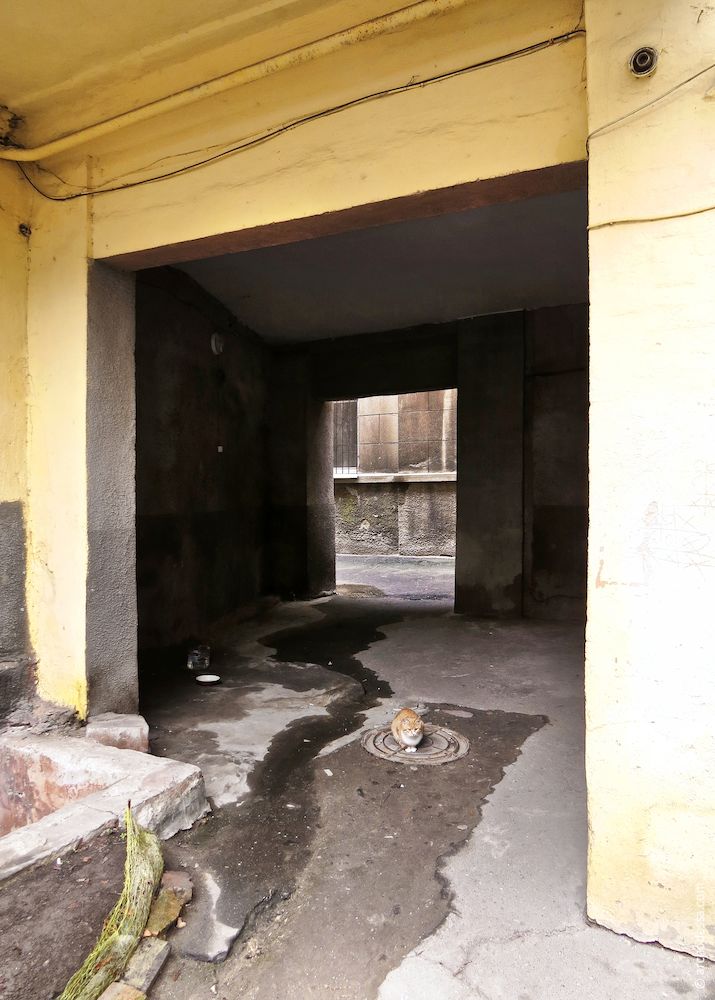 The largest in size central wing which is perpendicular to the building line, goes deep into the plot and divides a huge yard into two smaller but spacious ones. The lateral side of the central wing occupies almost entirely the part of the facial facade retreating from the building line. Another considerably smaller wing adjoins to the opposite lateral side in perpendicular position. Through the arranged archway in it the connection between the courts is carried. 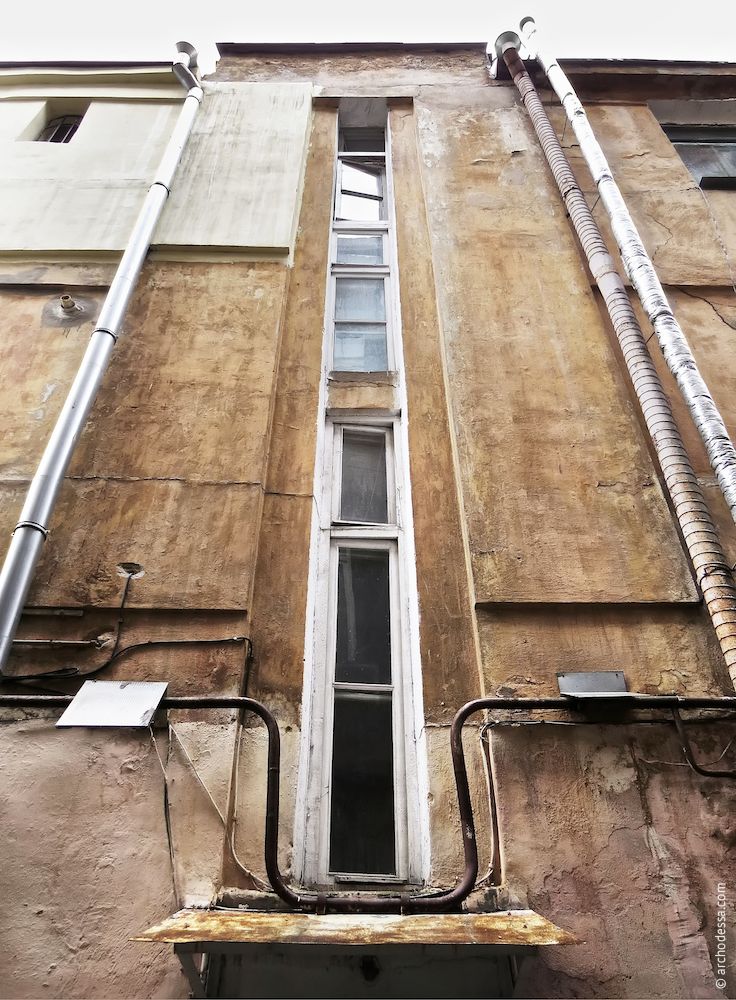 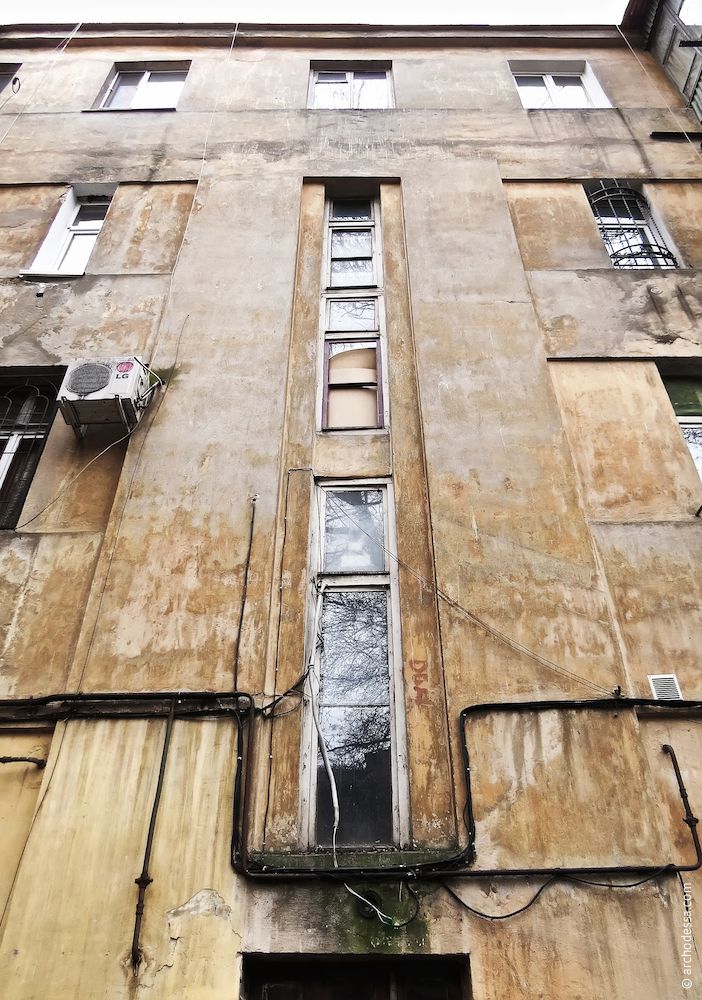 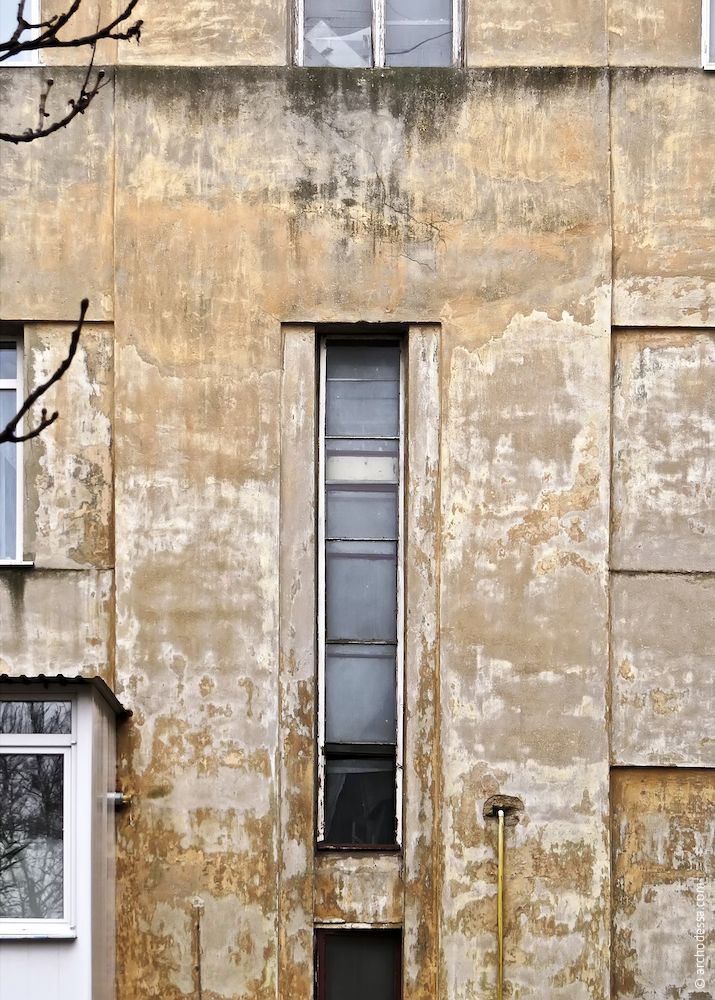 The house has six entrances, two of which are located from the side of the street in the kurdoner’s corners. The railing composition is very simple — the square in cross-section pillars and four ribbon profiles which are parallel spans and landings. Ribbon profiles are connected through the rough rivets. 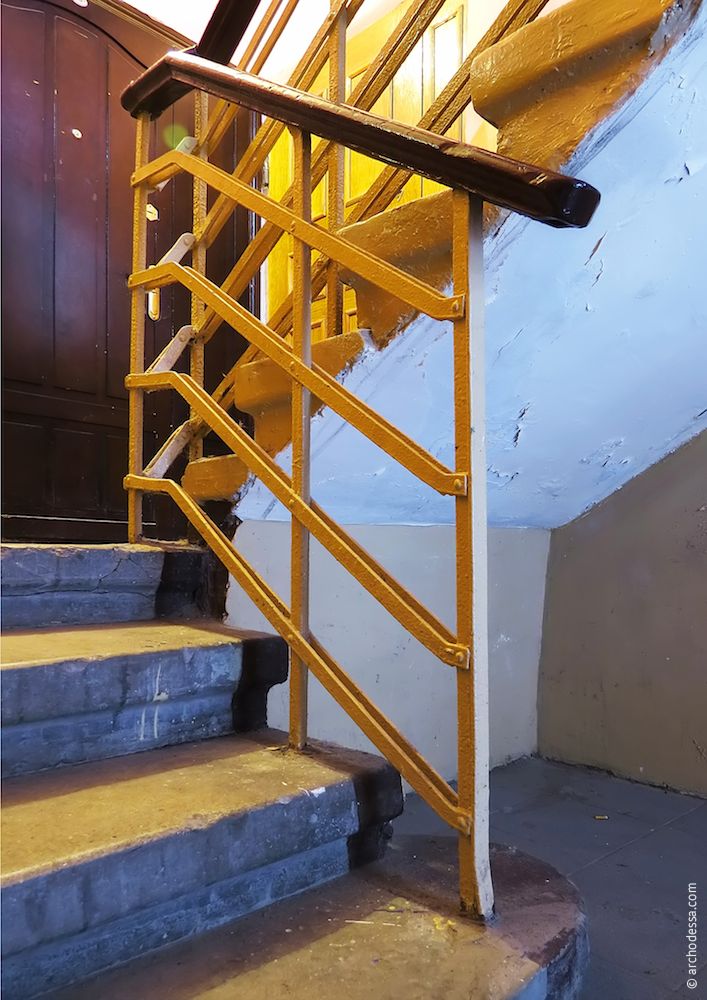 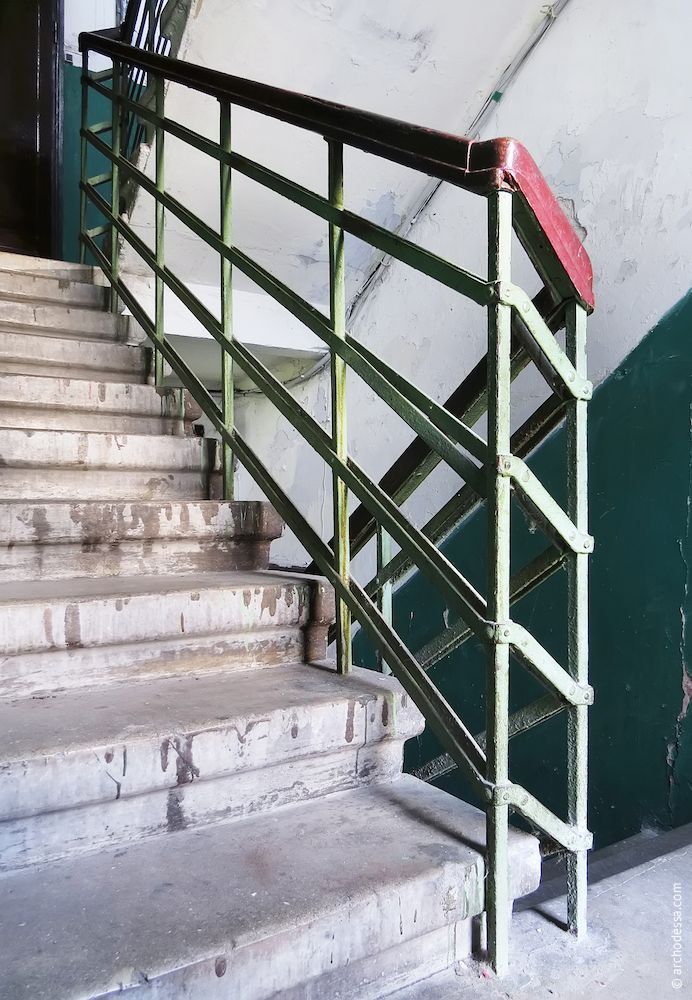 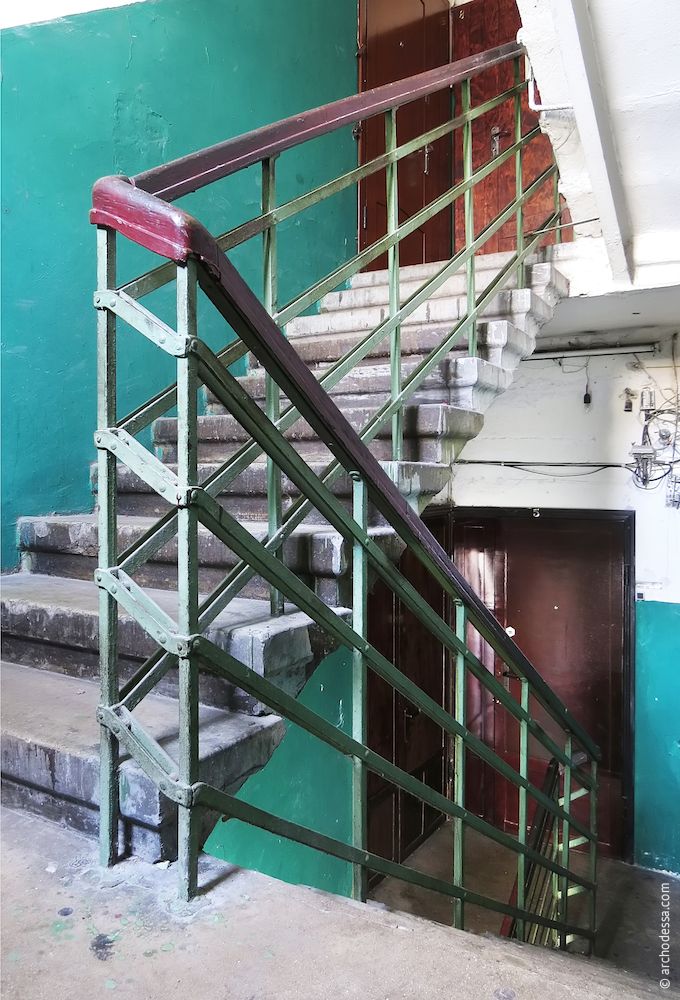 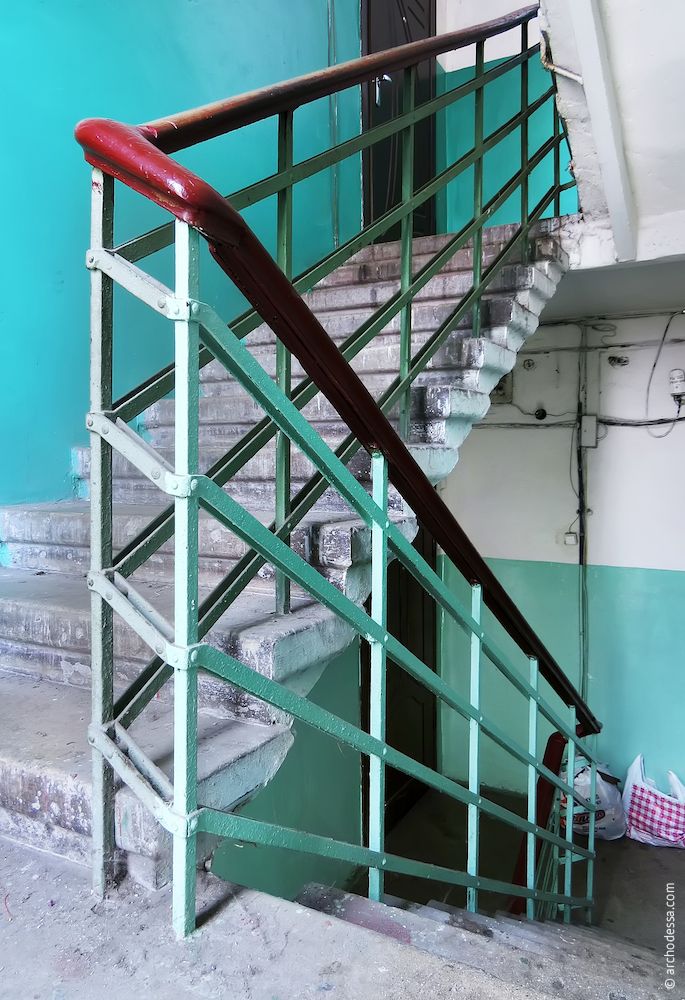 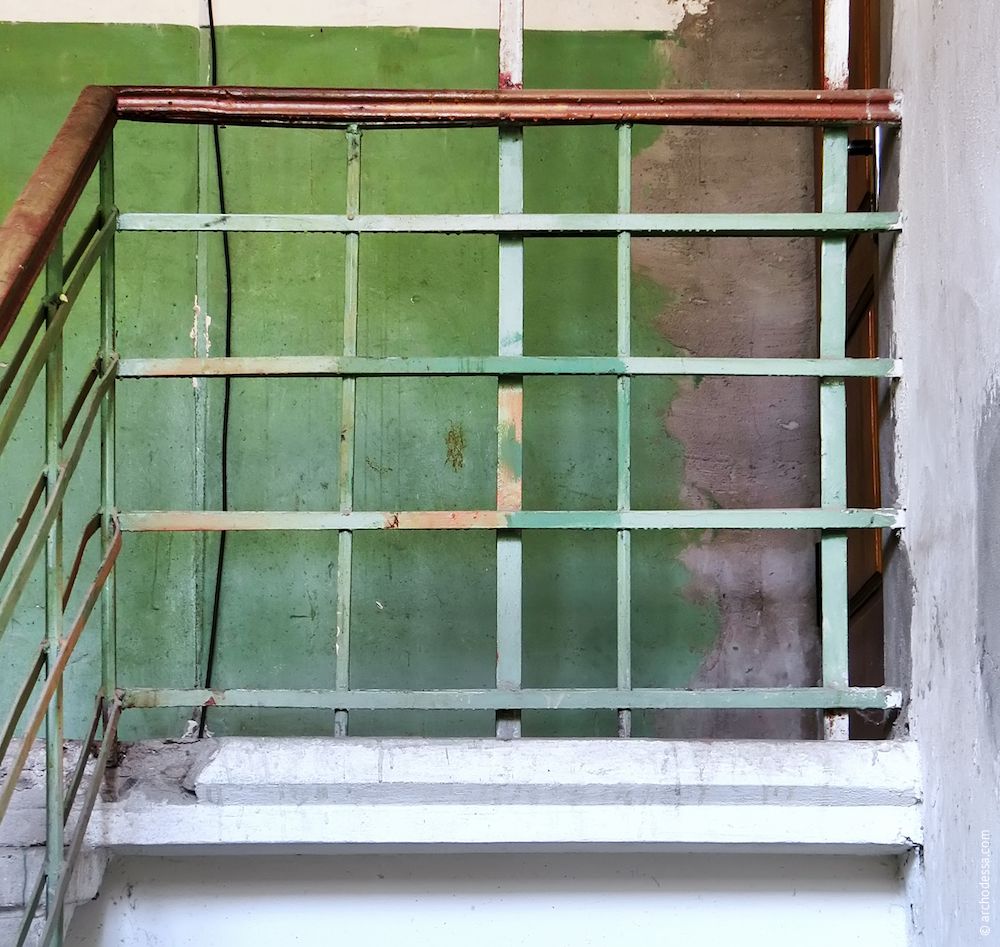 Railing of the upper landing

Some of the flats in the house also preserved the original doors. 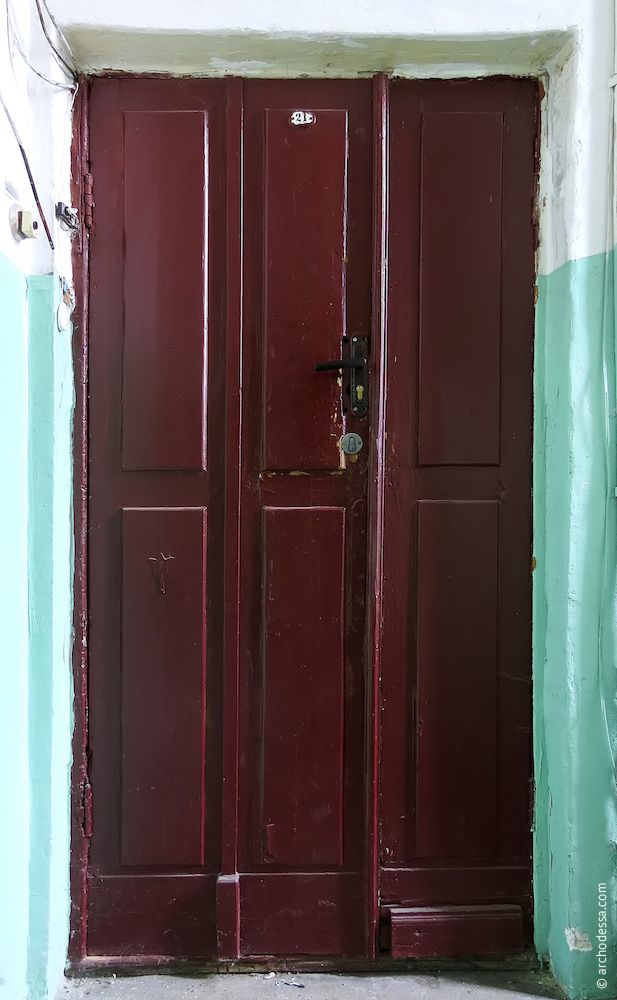 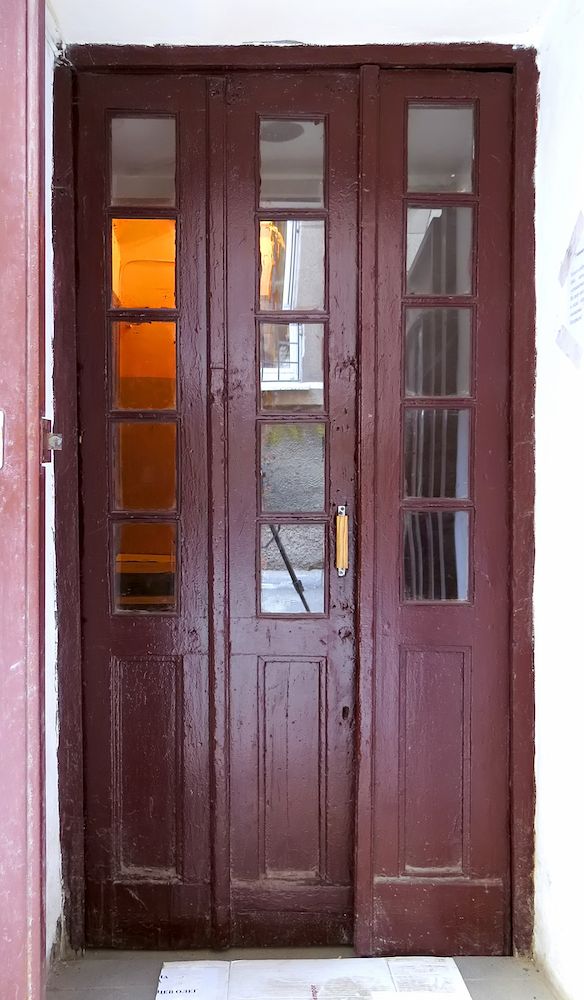 Outside corners of the rear wing are smoothed by roundings. That is a purely rational decision, because the resistance to erosion is much higher with this form of the angle.

In Troitskaya Street in the house of Soviet merchant fleet the architect resorted first to essential for himself methods and compositional moves that were applied to the next project in more mature form — a house on the corner of Mayakovsky Lane and Preobrazhenskaya Street.