Sprung up in 1914 at a crossroad of Pushkinskaya and Troickaya Streets, a huge apartment house of Asvadurov K., was destined to become one of the last significant pre-revolutionary buildings of Odessa. The building boggles minds at present as well, embodying Art Nouveau fancifulness and pompous imperial spirit of Empire style.

In 1913, on the spot of G. Greenwald’s house (1832, arch. I. Kozlov), at the corner of Pushkinskaya Street and Troickaya Street the construction of a huge building for those times began, it was an apartment house for tobacco manufacturer K. Asvadurov.

The tobacco company «Isaac Asvadurov’s sons» was founded in 1886. The latter, how it was written in advertising in 1896, «in a short time was so successful in satisfying the tastes of connoisseurs —consumers of tobacco goods that in 1888 in London and Brussels World Exhibition was awarded big gold medals for tobacco goods and a honorable diploma for cigarettes. Concerning these products every day spreading throughout Russia and abroad, they obtain favorable notices.»

Initially the factory was located «in a vast exemplary housing with an electric lighting and central heating» in Asvadurovyh’s own house at 58, Uspenskaya Street (later — 66), and the main store was located in Ekaterininskaya Street, in Wagner’s house, and worked there until the Soviet times.

Pompous, speaking volumes about the social status of the customer, the house in fact was building towards the end of the firm’s flourishing. Its construction took less than a year, and the decoration work was completed shortly before the outbreak of World War I.

Creative union of architects LM Chernigov and J. S. Goldenberg was durable and productive — the building once again proved it for its architectural merits, which were quite a few. In particular, it can be said with confidence that finally shaped Goldenberg’s style and hand was just realized with this building , where he not only fulfilled a purely architectural work — the detailed design calculations of the five-storey building was preserved. In addition, the architect acted as a contractor. The skill and taste of the architects are proved enough by the conspicuous fact that, in the light of enthusiasm for «retrospectivism» in the first half of the 1910s, Asvadurov’s house became the subject to imitate. Besides, being a significant part of the urban development and the actual dominant of Pushkinskaya Street and Troickaya Street crossing, the house with its aspect prescribed a Facade composition solution of «Promstroibank» building, raised by the architect L. Volkova and engineer L. M. Frack on the same crossroad in 1987-1990.

The building is one of the largest in size of pre-revolutionary Odessa buildings, the second highest after Margulis’ house in Sabanskiy lane and occupying the largest area of land housing (the period of Art Nouveau buildings). The plot itself can be divided into three wings. The front wing in Pushkinskaya Street has five storeys and two main entrances (ground floor is reserved for trading space). Similar wing along Troickaya Street flows from five to six storeys due to the incline of the Street, so it is difficult to define number of storeys. The third wing, which is located within the plot, is a residential building of the late XIX century; it is designed plainly and looks ordinary.

Asvadurov’s house itself was designed so that it forms a right rectangle yard, being enclosed with above-mentioned yard wing. Despite the considerable size of the building, causing the impression of heaviness, it is not without its share of grace and thanks to the abundance of ancient architecture and sculpture motifs, it impressive with strength and serenity.

The composition of front Facades is similar, but the length of the house along Troickaya Street half as longer as its extend in Pushkinskaya Street, due to the fact that the side parts are occupied six windows axes edgewise against two, respectively.

The corner of the house is marked out with the massive rectangular bay window that combines the second and third floors, culminating in the fourth floor balcony-terrace.

The composition is crowned with a gable indissoluble with the cornice decorated with a bas relief depicting Aquila eagle. The plot is directly linked to the Roman theme — such images were used as signs of the Legion in the army, and were put on a pole and decorated with wreaths- rings phalerae. Borrowing Aquila as a plot to bas reliefs became frequent in the age of Empire and found its logical continuation in retrospective Art Nouveau architecture of the 1910s.

pushkinskaya-37-066.jpg
Corner pediment and Aquila. Clearly visible above the drum of the lost rotunda, overlapped with tin sheets.

pushkinskaya-37-067.jpg
Bas relief of Aquila on the corner pediment

The central axis of each Facade which are symmetric in composition, is emphasized with a wide two-storey height risalit (in Troickaya Street — three-storey), acting as a pedestal for a stylized portico of four semi columns with simple capitals high as two stories too.

pushkinskaya-37-080.jpg
Bas relief on the cornice

On the entablature of the portico there are four statues of antique style (because of dilapidation now is attached to the wall with the fixing bars) and a huge pediment with a semicircular niche serves as the composite dominant of the center, as well as the entire Facade as a whole. Its framing was directly borrowed from the architecture of classical Empire — the same course can be seen, for example, in Kamo palace Facade framing (4, Tiraspol’skaya, 1830—1832, Arch. G. Torricelli).

The space between the semi columns is enlivened with three small octagonal bas reliefs with centaur images, Neptune (most probably) and an abstract ancient temple, framed by drapery. Two semicircular bay windows, ending on the last floor and conventionally defined with semi rotundas, decorated in the same plot, depicting the ancient temple (but supplemented by two torches on the sides) impart additional grace to both pediments. Facade walls surface is rusticated, the lower floors are processed with pick dressing texture and have a darker shade (building original decision is in the restrained grey).

pushkinskaya-37-069.jpg
One of the symmetrical bas reliefs with floral motif

Upper storeys rustic stone is conventional, shallow. Window apertures of the first (in Pushkinskaya and Troickaya Street — the second) floor are the closest to the plastic forms of Art Nouveau, the general outlines of bay windows also hint expressively at the era of building a house. Massive stone balconies were almost completely lost, however, recreated on Pushkinskaya Street side during the last repairs. Simpler balconies with forged railing met the same fate. On Troickaya Street side the balconies were not recreated.

pushkinskaya-37-007.jpg
Reconstructed ornament on the reconstituted balcony on Pushkinskaya Street side

pushkinskaya-37-057.jpg
Carved detail of the original sash on the ground floor on Troickaya Street side

The tower rotunda was lost as well, once decorated the corner of the building and clearly visible in old photographs. Emergency tower was dismantled in the early 1990s, and the drum, remaining in its place, was covered with tin sheets.

In the picture below (1927) while still present tower rotunda is clearly visible and the house itself was not even fifteen years after the end of construction.

On the central axis of the Facade on Troickaya Street side, there is a high, occupying two storeys, passage arch with cylindrical vault, design motif of the latter is similar to the halls vaults in the entrances in Pushkinskaya Street. In the arch itself the original doors, lost in time most of the decor, except for the carved wreaths, were preserved. The Facades of the building from the courtyard are quite minimalist and totally devoid of decorative design elements.

At different times, one after the other the original entrance doors in Pushkinskaya Street were removed. The identical door that led into the office facilities (now the College of Economy and Trade Management), in Troickaya Street side has been replaced with an approximate copy (unfortunately, having nothing in common with the original except for general composite shapes). The last door led into the left-side entrance in Pushkinskaya Street and disappeared in the second half of the 2000s. 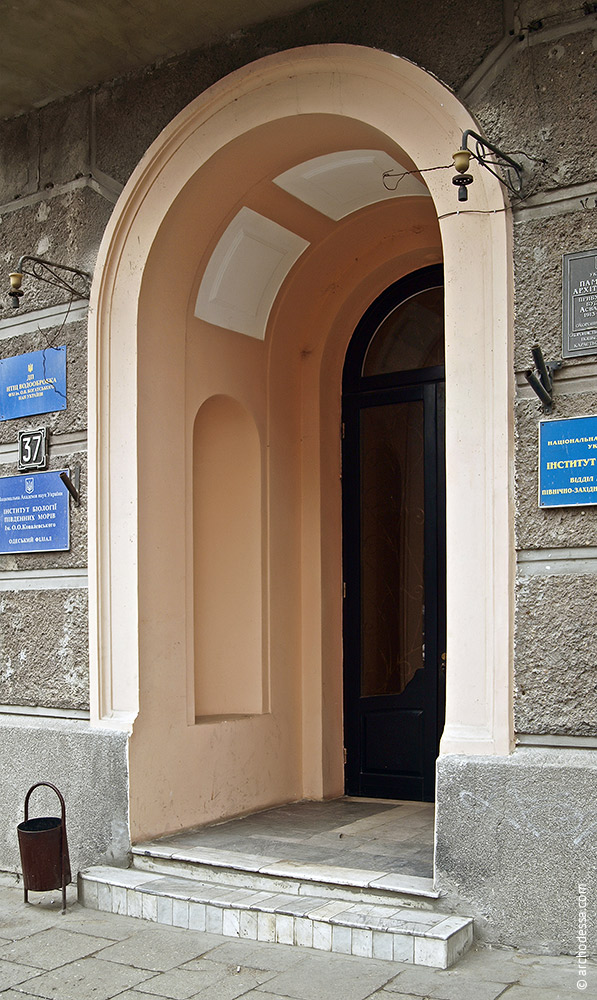 Main entrances are identical in configuration, but in right direction staircases are parallel to the hall axis, which turned perpendicular to the left-side staircases. Halls cornices support semi columns with capitals in exaggerated, modernized proportions. The vault is covered with square hollows; in the center of each a flower is added. There are two varieties of flowers, arranging in a checkerboard pattern. Such a simple, at first glance, the course gives the impression of unusual solemnity, despite the relatively small size of the hall.

pushkinskaya-37-045.jpg
Tambour view from the staircase

Halls at both entrances are identical in design, but the left-side entrance hall is half as longer, due to the large, square tambour, which vault repeats compositionally the hall vault and is supported at the corners with single semicolumns. The staircase itself has an elongated rectangle form, where one of the short sides is replaced with a half-arc and makes a semicircular landing. This is the place where the doors to the apartments are placed (the semicircular landing in right-side entrance is between flights of stairs and apartment doors are located on a right-angled area) with the lift door between, which aperture is significantly smaller.

Above the lift door on each floor there is an octagonal bas relief depicting a centaur. The same bas reliefs, among others, can be seen on the Facades of houses (mentioned above). In the right-side entrance bas reliefs are not available, but door transom remained between the hall and staircase was preserved. Doors of the apartments are restrained according to the total composition, but are decorated with carved «cameos», meanders along the top edge and symmetrical floral compositions along the bottom. The simpler doors, without ornaments, can be seen as well. However, their belonging to the period of Art Nouveau is indubitable.

Entrance railings pattern is relatively restrained, decorated only with floral ornaments on supports. The spaces between supports are devoid of decoration except meander bordering with the railings. All of the major design elements focused on the entrance passage, where a decorative support is supplemented with a large square scroll (in tune with the above-mentioned meander) and palm leaves.

In the windows a large part of stained glass, which has clearly visible images of wreaths and a variety of floral motifs, has been preserved. Simple in composition sash has come to our time without modification.

Staircase ceiling design is very simple and was brought to geometrism, but ceilings in both entrances vary in composition solution. Besides, the room in one of the apartments, where now there are offices of various organizations, keeps a gorgeous cornice directly quoting «stalactitic» ornament.

pushkinskaya-37-049.jpg
Door transom leading from the hall to the staircase

pushkinskaya-37-050.jpg
Decorative arch above the niche

There is no doubt that the house was intended for living of rather propertied people: some apartments area reach 170 meters and equipping of the building was carried out on extremely modern lines. The building was equipped with lifts, bathrooms and electric lighting. Housing insolation was also thought out well, including ground floors areas with windows facing the courtyard.

In the post-revolutionary period house gradually lost its residential functions: offices of various city organizations, including Dorprofsoyuz (trade union of railwaymen) and the newspaper «The Black Sea whistle» housed in the former apartments. Later, there was the city executive, so the house was mentioned in a newspaper in midst 50’s:

«A meeting of the Odessa City Electoral Commission for elections to the City Council of People’s Deputies, which discussed the organizational and technical preparations for the elections, approved work plan and set daily duty in the evening. The Commission is set in the city executive house in 37, Pushkinskaya Street.»