12, Bolshaya Arnautskaya Street. Courtyard outbuilding of A. and M. Pansieri

On Bolshaya Arnautskaya Street, under the present-day number 12, one of the little-known houses by the authorship of an architect A. B. Minkus rises. In spite of the feeling of mediocrity at the first glance, it, none the less, represents an interesting example of early rational Art Nouveau. 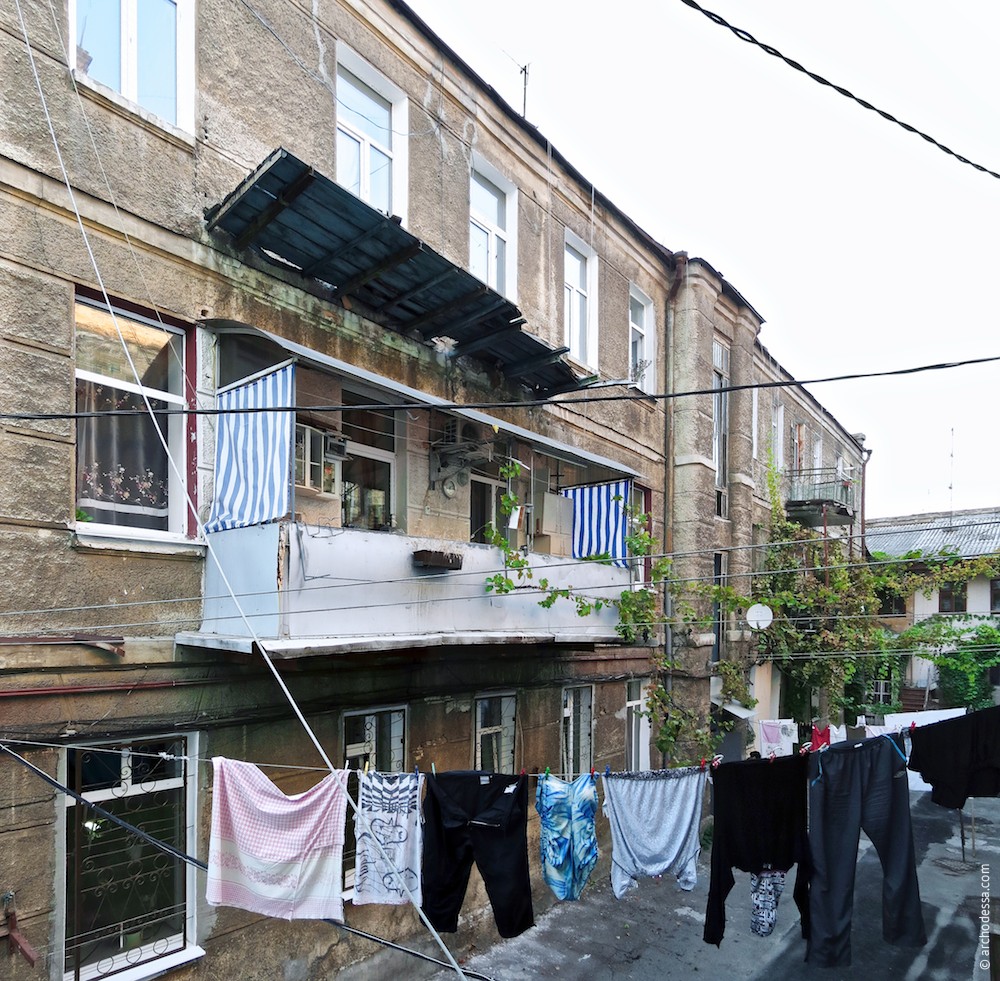 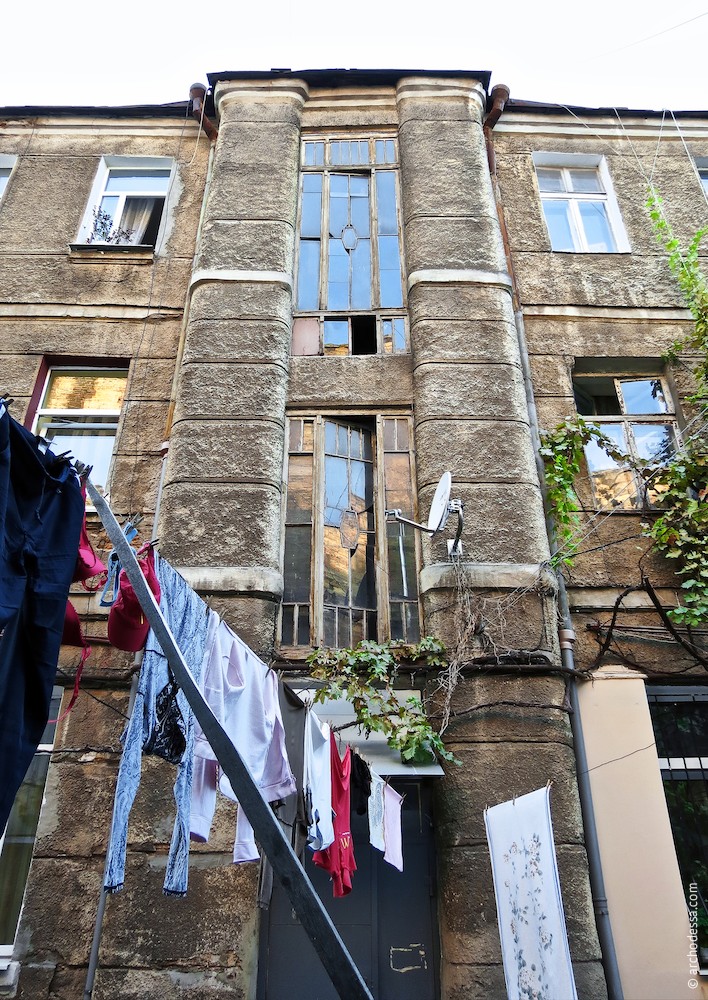 Unnoticeable from the side of the street, a three-storey apartment outbuilding which (according to the data by V. A. Pilyavskiy) was built for some Serbulov in 1906­-1908 years, is the kind of building of average quality.

However the data in the above-mentioned reference book, concerning the lot number 12, is not exact. It’s worth noticing that in the reference book “All Odessa” for the year of 1910, there are quite different owners — A. and M. Pansieri that may be due to the fact that in the book of Pilyavskaya another mistake occurred, in particular, and about the fact that Serbulov owned houses number 12, 14, 16. However in the reference book ″All Odessa″ of 1899 the owners of the above-mentioned lots were stated as the heirs of Pansieri, S. and Y. Mihelevich and Teper accordingly, and in 1910s the lots were also in their ownership. Returning to the house no.12 it’s worth noticing that the authorship pointed by Pilyavskiy is beyond doubt.

Designed by A.B.Minkus, the outbuilding is constructed in the left part of the lot: its back side adjoins the firewall of the neighboring house no. 14. Among all buildings, being reckoned under the number 12, the most significant one is exactly the apartment outbuilding. Moreover, it has a status of  architectural monument of local importance, at the same time the rest of the buildings acts as a background and has no significance.

The main house, facing the building line of the street with its facade — is one-storeyed, and the right wing — is a gallery, therewith for the long years of its existence it has lost almost all the elements of authentic decoration, and from the exterior side it was almost completely rebuilt in the second half of 2000s. Probably these styleless houses date from the first half of XIX c., but because of the absence of style it is very had to date them even approximately.

Left-side apartment outbuilding is definitely interesting from the architectural point of view; with its project Minkus proved again that inner-yard houses can carry the element of aestheticism.

As it befits the buildings carried out in rational Art Nouveau style, the house is completely deprived of modelled décor.

The facade is covered with texture roughcast plaster and stripes of rustic stone. The main entrance is located in the center of extensive, 13 windows axes wide, facade, and is represented as a key element of the composition, strengthened with two pylons with rounded corners. By plasticity they have a lot in common with Egyptian architecture and, together with dark plaster, form a strict monumental look.

The outbuilding has three floors and was probably estimated for six flats, two on each floor.

The attire of the main entrance harmonizes with the style of the facade well, with the same roughcast plaster, a half of a meter high, covers the lower part of the wall; the railing with a geometrical design presents a slightly complicated version of the railing in late constructivist buildings. 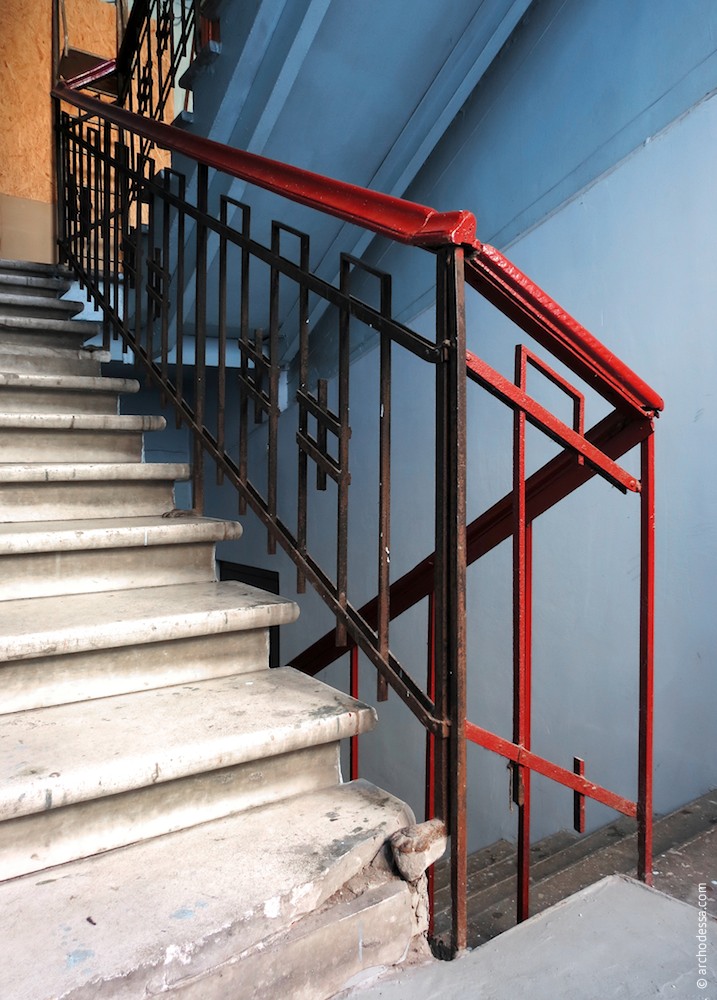 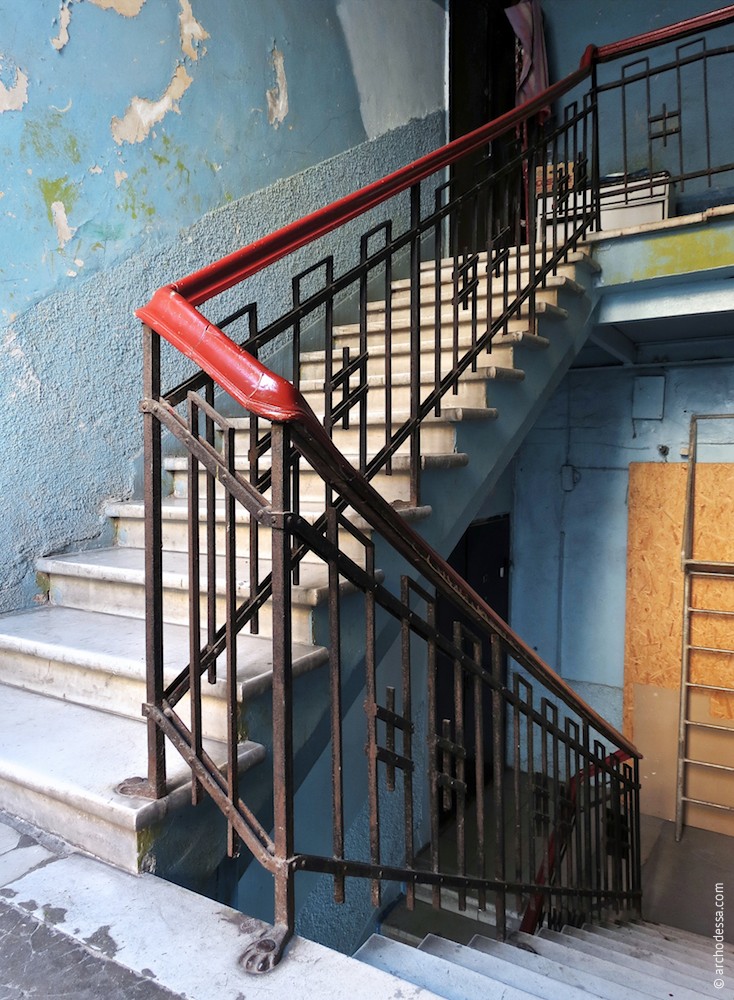 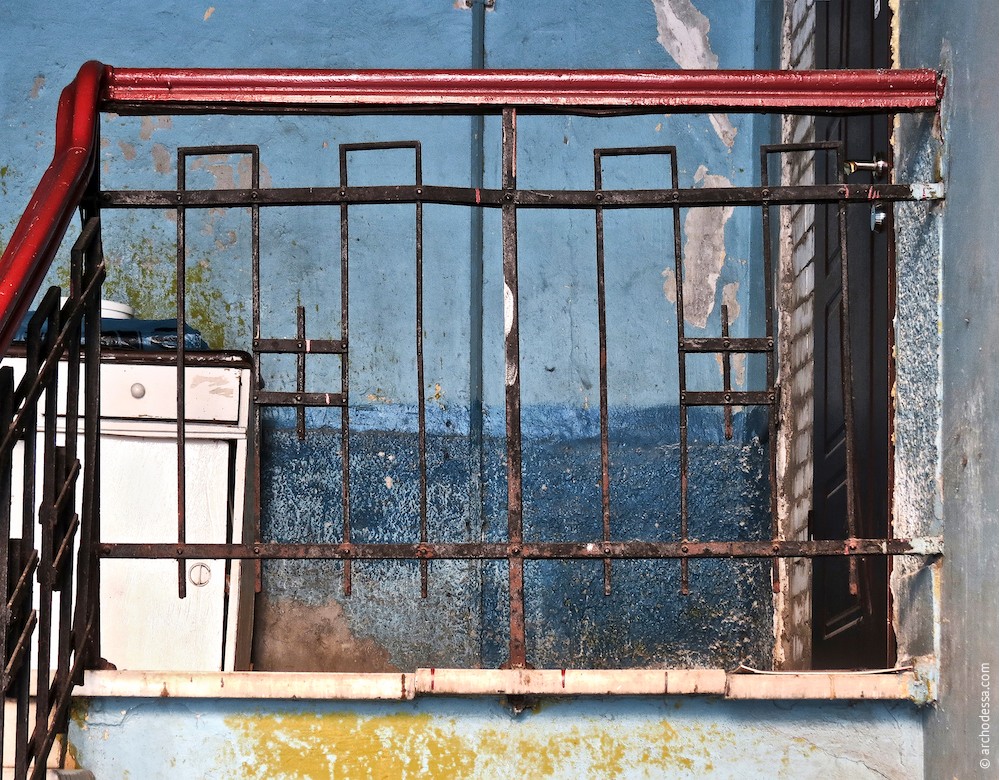 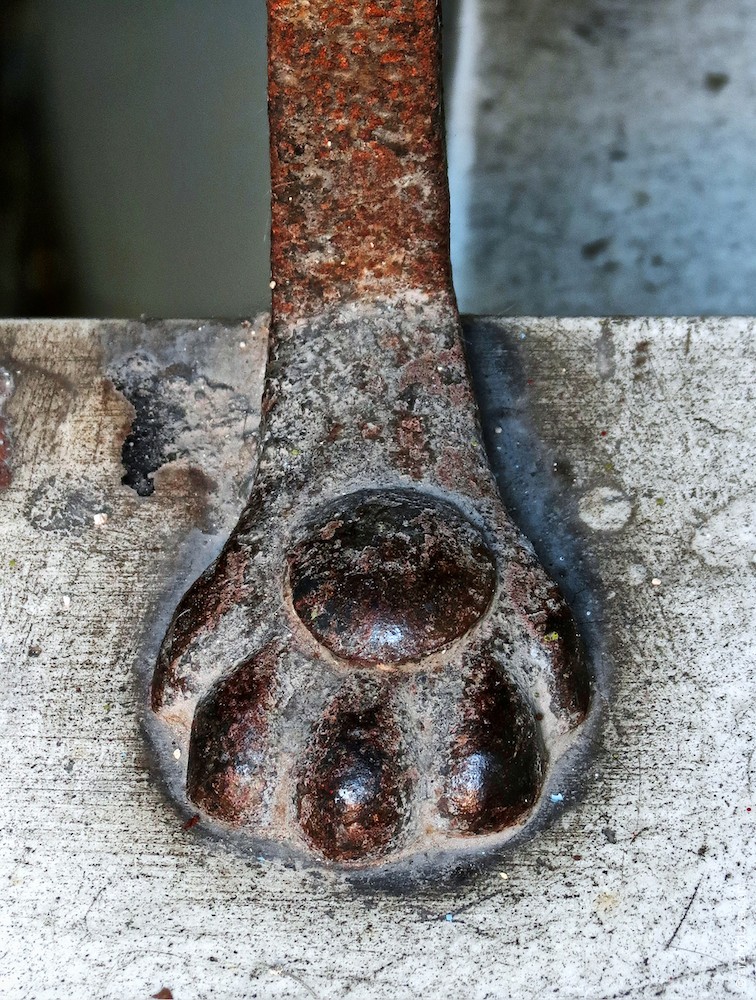 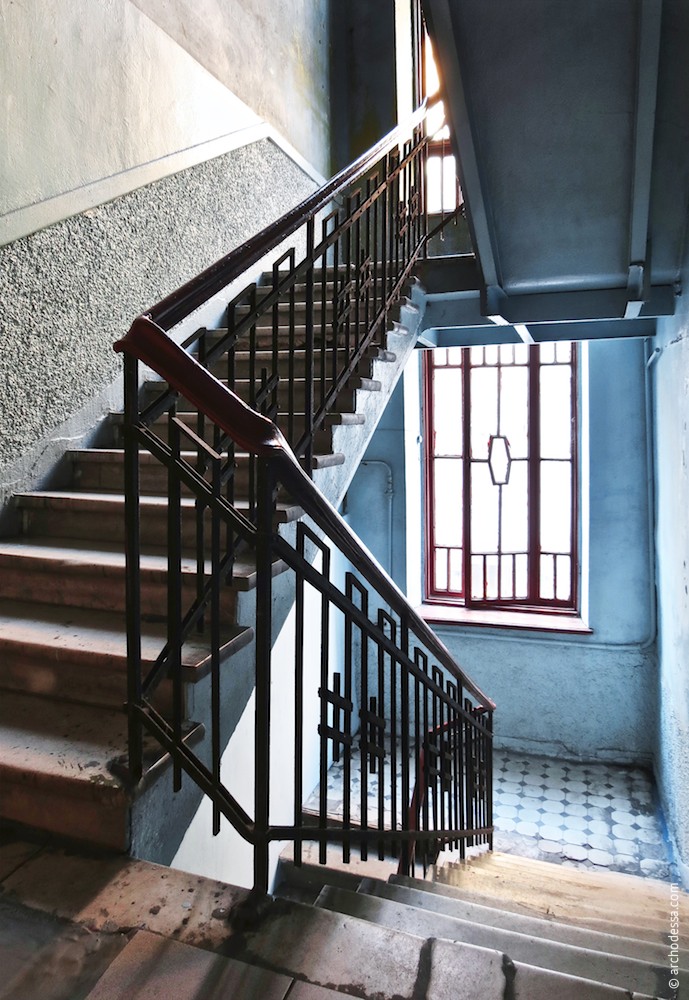 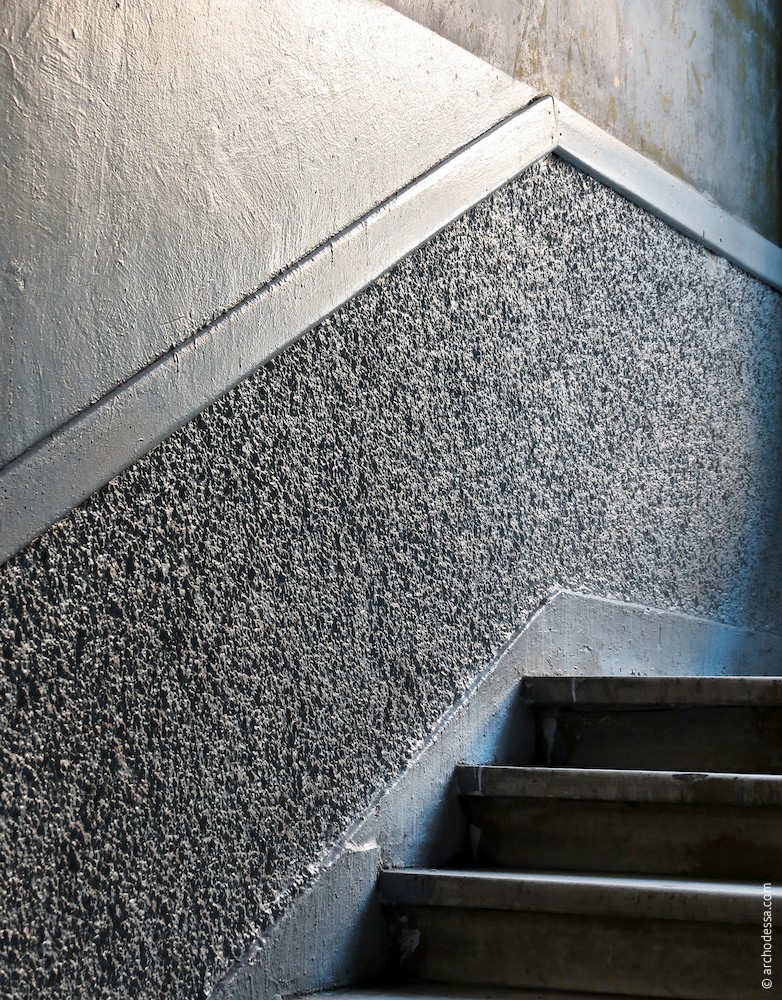 The floors of the stair landings are covered with the white tile (partially lost), and the steps are made of marble. 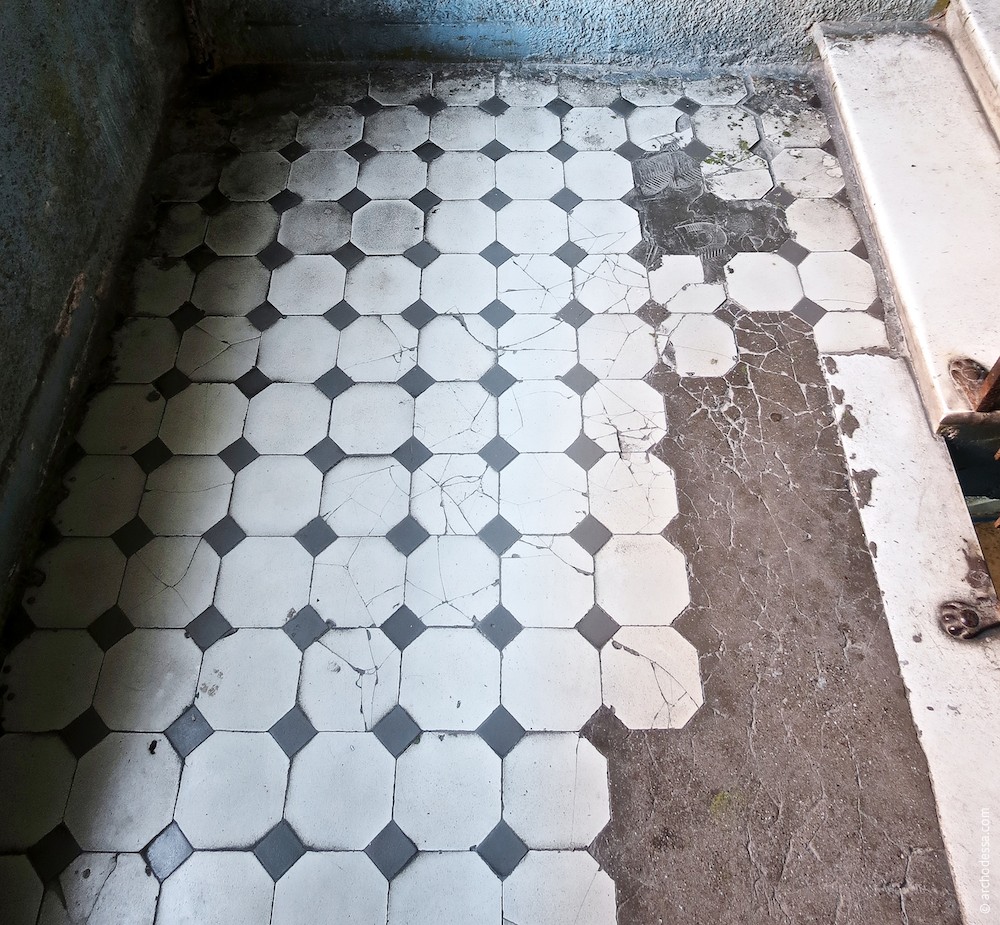 The entrance hall is quite spacious, has wonderful insolation and is illuminated by the big stained glass windows (unfortunately, now having lost their authentic glass). 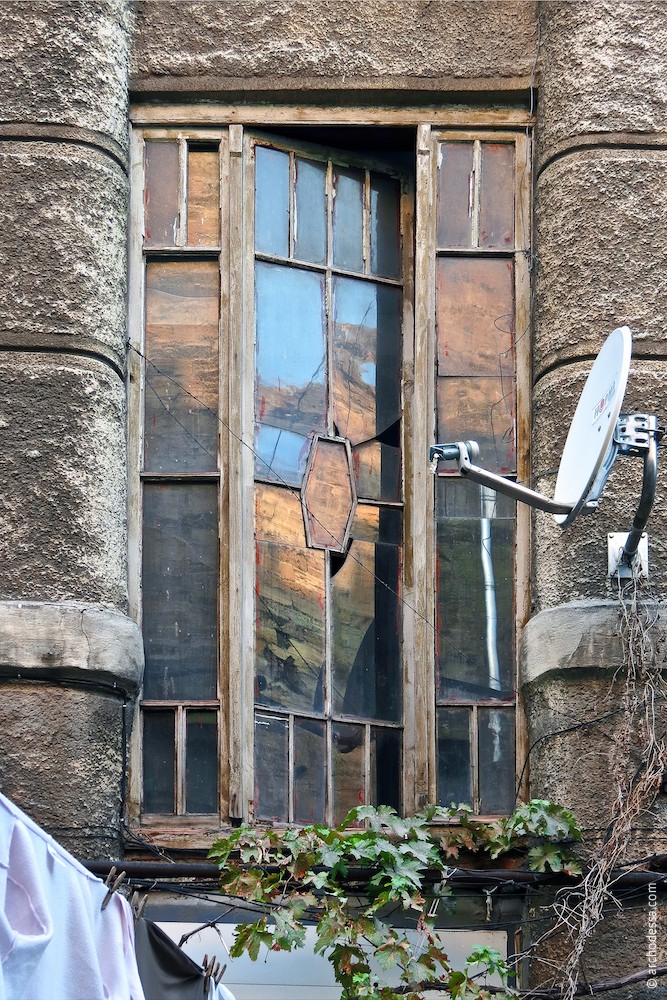 view from the outside)

In both ends of the outbuilding you can see spacious, which is rare, service entrance halls with metal stairs, which are probably not the original ones, installed at the time of building. 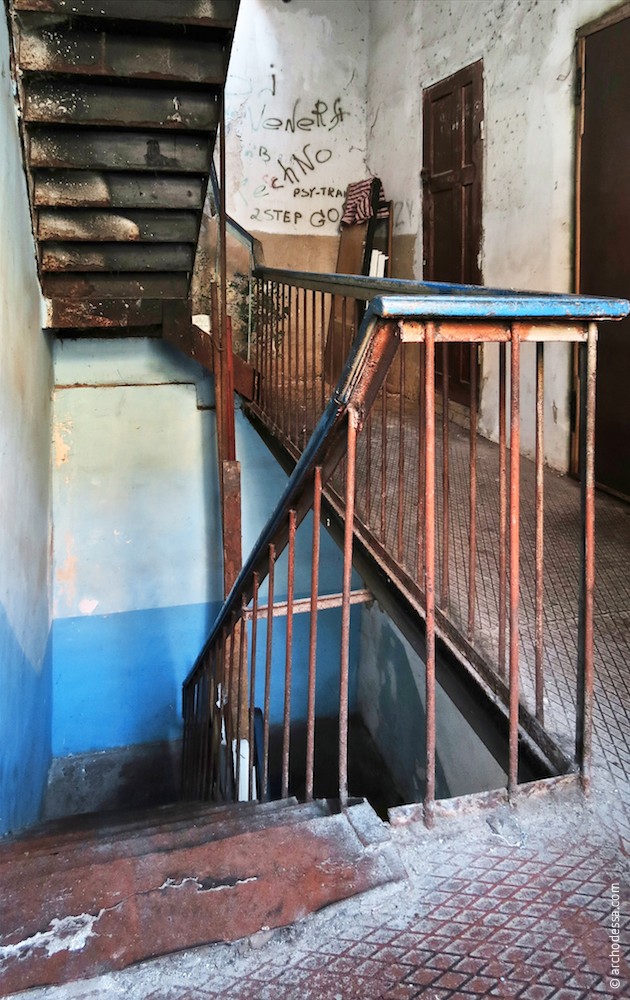 If you analyze the features of the building in general, and especially the strict geometrical sashes of the front door windows, it can be supposed that the house was built a bit later than the official date of building. Geometry in the patterns, décor and decoration works, began to be used by the architects in 1910s, and in the constructions of A.B. Minkus 1900s, historical stylizations prevailed, and they vanished from his projects quite late.